Loves and life on the Garden Route in South Africa

Through the eyes of volunteer coordinator and crazy cat lady, Sharon

My volunteer did some facepainting with some kids in Knysna January 12, 2015 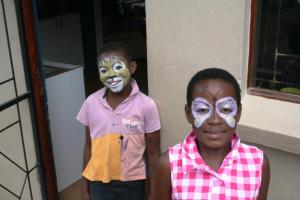 Lion and a butterfly

Face painting with the kids from the local township and safe house in Knysna in South Africa. All done by my volunteer

Lion and a princess 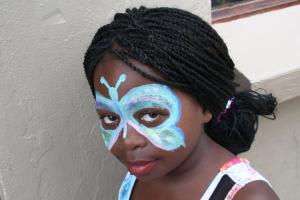 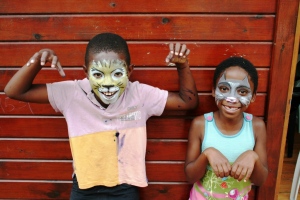 Lion and a cat

“Today my volunteer had a special outing planned for the kids from the safe house, a boat trip on the famous Knysna lagoon followed by a lunch of KFC.

Knysna is one of the most famous and well loved estuary towns of South Africa with the lagoon being a huge integral part of its tourism industry. Sadly though the lagoon is not often experienced by the kids of the township so it was extremely special that my volunteer could give them this opportunity. 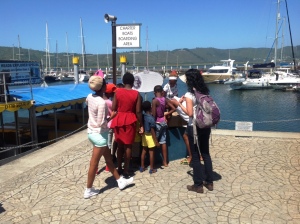 Getting ready to board…

We went down to the Knysna Waterfront and waited in line for our turn to board “Three Legs” the boat on which the kids would be going. As it is still school holidays the boat was really full but the kids managed to get great places with Thombi and Angelo sitting right by the end of the seat close to the water. Even little Toffee was excited sitting quietly with a huge grin.

This is the life

The navigator started “Three Legs” up and off we went on the open water with the guide entertaining us with great commentary full of jokes. “Three Legs” went all the way up to the Knysna Headlands were the sea comes into the lagoon and the kids loved it when the swells became more choppy and the boat rolled around. Luckily our navigator was very experienced so we were never in any real danger. The kids got to see what Leisure Isle and the other side of the lagoon looked like from the water with the cliffs jutting out and their caves at the water’s edge.

We then turned back to the Waterfront and set foot on dry land after a good 75 minutes on water. You could see the enjoyment on the kids’ faces and the happy smiles. Then it was time for them to have their lunch with KFC Streetwise 2 meals for all of them-a big favourite- before heading back to the safe house. Once again the kids all nodded off in the car after a very successful and fun-filled morning. 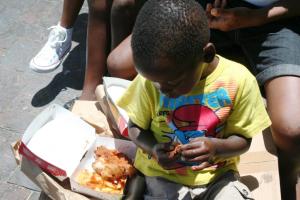 My volunteer has lots of fun filled activities planned at the safe house over the next few days. They will be decorating (and eating) gingerbread men, face painting, arts and crafts fun and making their own pizzas from scratch (and once again eating them) so they will only have an outing again next week although they will be far from bored and extremely entertained.

If she wasn’t volunteering at the safe house and also thanks to the fundraising she did, the kids would be sitting bored stiff at home so I think they will truly have a school holiday they will never forget and cherish these memory”

What I get up to as a volunteer liaison…

And this is what I do as a volunteer liaison in Knysna…. An insert of one of my days…. My volunteer’s name has been taken out for anonymity

“As it is school holidays in South Africa at the moment, our volunteer knew that her placement at the safe house would be filled with lots of fun with the kids starting from her very first day.

The children all live in the township of Concordia East on the top of the hill above Knysna town so the first order of the day was to decide on what would be the day’s outing. It was decided that a trip to Diepwalle (Deep Walls in English) would be a great and educational outing too. Sandwiches were made for a picnic and fruit, cool drink and chips were bought, a blanket packed and then it was off to the forestry station taking a windy road through the indigenous forests home to the elusive Knysna elephants known to be the most southern free-roaming elephants in the world. On the way we spotted Vervet monkeys sitting on the road that quickly sprang into the tree tops and brought shrieks of laughter from the kids.

Once at the South African National Parks board (Sanparks) forestry station, the kids enjoyed their picnic giving them energy for the rest of the outing. It was then time for a tour of the museum with the guidance of Sanparks employee, Denzil, who explained all about the elephants. Denzil is employed by Sanparks to monitor, track and catch data on the elephants for ongoing research so is quite the elephant expert. As they have a large bull elephant skeleton at the museum, he was able to give the children information and ask them questions using the skeleton as a guideline.   Little Tracy even learnt that elephants do not snack on humans when they are hungry-which is pretty much all the time!

A final tour on the history of the woodcutters in the museum ended our time there with the children starting to lose focus and getting fidgety so it was on to the next stop of our outing.

Our next stop was down the road to the big tree which is a really famous Outeniqua Yellowwood found in the forest and estimated at being well over 600 years old. This was followed by a boarded walk through the forest enjoying all the greenery and nature around us and trying to hear the call of monkeys and baboons and sightings of the shy Knysna Loerie-a local bright green bird with red feathers underneath topped with a white crest on its head. It is a bird indigenous to these forests and often seen as a mascot for Knysna. Sadly we had no luck spotting the Loerie or primates.

By this time it was time to head back to the safe house with all the kids dropping off one by one to sleep exhausted from all the food and fun. A true Knysna outing of forests and elephant stories and hopefully one that the kids will have fond memories of for life”